Given that WWE has never stepped foot in China, and has been patiently awaiting an opportunity to perform for Chinese fans for years, I was incredibly excited and honored when I found out that I would be amongst the first to trodden this new territory.  We were part of the Shanghai Expo 2010, an Expo held every four years, and visited by nearly 70 million people throughout the year.

We arrived in Shanghai via Tokyo on Sunday afternoon, and every one of us was glued to the windows of the bus on the way to the hotel.  Imagine the size of LA County, the density of New York City, but remarkably clean!  The buildings just kept coming and coming, and each one’s architecture seemed to try to out do it’s neighboring building.  At night the entire city lights up with beautiful lights.  A truly beautiful city.  As we approached “downtown” we got a closer look at the streets and realized that they were spotless!  An incredible sight to see.  We arrived at a beautiful hotel and after a quick cardio session and bite to eat, I was off to the expo.

We performed at the Cultural Center, which looked like a giant flying saucer.  Seats had been released earlier that day, and were sold out within an hour!  The anticipation of this show was intense, for none of use had any idea how the fans would react.  We got off the bus and received a loud and warm welcome from the fans waiting outside.  Good sign!

It was me vs. Alicia Fox for the first ever Diva’s match held in China.  What an incredible experience! The Chinese fans reacted to every move we made.  To me, it seemed similar to the reactions we receive from fans in other parts of Asia.  They seemed so excited to witness the action, almost as excited as we were to be there.  They even knew how to say “You suk!”

I can proudly say I picked up the first Diva victory in China.  What an honor to be a part of our first step into China.  It was a great success and we can only hope we will be invited back.  One thing’s for sure, the fans in China are ready for the WWE.  I can’t wait to go back! 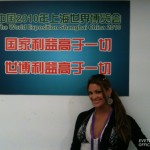 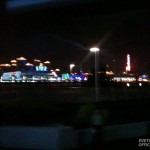 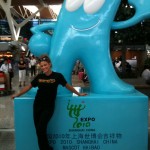